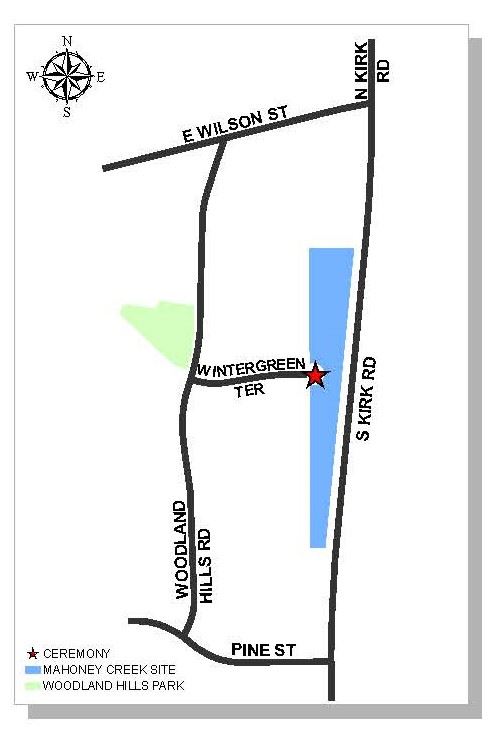 The City of Batavia and the Batavia Chamber of Commerce will host a Ribbon Cutting to celebrate the completion of the Mahoney Creek Tributary Project and to thank the residents, contractors, partner agencies, and city staff for their contributions. The ceremony will be 5:30-6:30 p.m. Tuesday, Sept. 13 at Wintergreen Terrace east, Batavia (map at right). All are welcome.

The City of Batavia is working on restoring stream quality throughout the City. This webpage will focus on the project to detain stormwater runoff upstream of the Mahoney Creek Tributary.

As part of the City of Batavia’s efforts to alleviate repeated drainage concerns and flash flooding along the Mahoney Creek Tributary and Mahoney Creek mainstream the City is exploring options to detain excess runoff upstream on a City owned parcel and potentially in an upstream existing drainage easement.  The upstream drainage area in question is generally bound by Wilson Street to the north, Woodland Hills Road to the west, Pine Street to the south and Fermi National Laboratory to the east where the runoff drains from the east under Kirk Road thru the City owned property to the Fox River via Mahoney Creek.

West of Kirk Road has been completed and construction fencing removed.  Only the silt fence and sediment logs will remain until the cover crop has been established, at that time all erosion measures will be removed.  Weekly watering of trees will occur during the summer months.

Fermi side: The grading of the basin was completed last week with fine grading being completed this week.  In addition this week the installation of native seed and blanket will be completed.  The construction entrance and delineators on Kirk Road will be removed by the end of the week.  Only the silt fence and sediment logs will remain until the cover crop has been established, at that time all erosion measures will be removed.

Both sides are under performance standards and will have monitoring and maintenance for a period of 3 years by the contractor, V3.

Installation of native seeding continued this week while all the native plugs were planted in the wet areas by the outfall pipes.  Next week the remainder of the native seeding is anticipated to be completed.  The only remaining item left on the west side will be hydromulching the turf area for regular Kentucky Bluegrass.

Fermi side: The week of 6/13 delineators will be installed along the centerline of Kirk Road to prevent any vehicle from making a left turn movement into or out of the construction entrance.  The construction entrance will be installed on Tuesday, 6/14.  Once all erosion control is in place the earthwork can commence.  The earthwork, weather pending, is anticipated to be completed by the end of June.

Trees and arborvitae have been planted where they were staked.  The City provided additional trees to reduce spacing and provide a fuller cover sooner in lieu of a fence.  The remainder of arborvitae will be planted this week. The installation of native seed will start this week and V3 will start along the Kirk Road side of the basin.  A pre-con was held today for work on the east side of Kirk Road and work is anticipated to commence late next week.

This week earthwork has been completed on the west side and most of the large equipment has been removed from the site.  Late last week the trees along the tributary were cleared and the creek was stabilized with seed, blanket and rip rap.  The stone (rip rap) has been placed at all outfalls.  Staking of trees, both on the berm and in the basin, will occur this week and stabilizing the west side will occur starting next week.    Work will commence on the east side of Kirk Road in a few weeks.

This week rain delayed some work.  Earthwork continued when conditions allowed.  V3 relocated the sanitary sewer in the middle of the basin in order to continue on with the excavation of the remainder of the basin.  In addition you may notice material cut from the bottom of the basin is being temporarily displaced on the sides of the basin until it can be placed in its final location.  This may give the illusion that the berms may be taller now than the finished product.   Earthwork will continue next week along with tree and scrub removal along the Tributary.  This tree removal will allow grading of the creek from the outfall and placement of rip rap to stabilize the creek.

This week Clean Cut Tree Service was on-site and chipped the trees and hauled them off.  Only the logs remain to be removed.  The earthwork has continued and the basin is starting to take shape.  V3 will be completing the sanitary relocation next in order to continue on with the excavation of the basin and creating the western berm.

This week Clean Cut Tree Service will be on-site to chip the trees in the basin and haul them off.  Weather has altered their scheduled, but they will require at least 2 days on-site for removal and stump grinding. Next V3 will be completing utility work (sanitary relocation) followed by excavation of the basin with earthwork / moving dirt.

Next week Clean Cut Tree Service will be on-site to remove trees at the basin.  Weather pending they are scheduled to be on-site on Tuesday and take approximately 2 days to remove and grind the trees.  Once all trees are removed V3 will be on-site to place the silt and construction fencing.  Next V3 will be completing utility work (sanitary relocation) followed by excavation of the basin with earthwork / moving dirt.

The City completed a preliminary investigation and analysis on different scenarios and options for additional detention capacity upstream of the Woodland Hills neighborhood in the fall of 2018. The final report is being used to anticipate the scope of work for Phase 2 final engineering plans.  It should be noted that the 2018 study contemplated expansion of the existing stormwater basin east of Kirk Road as the primary option. Since the time of the initial study the City has finalized its acquisition of parcels west of Kirk Road for the purpose of stormwater management. Through the final design process the City desires to evaluate various different options/alternates to retain runoff on the parcels west of Kirk via a retaining wall, landscaping berm or some other type of structure to be constructed along the westernmost property line. Expansion of the existing stormwater basin will be included as alternate work within the final bid package, depending on the engineer’s estimate of probable costs.

The anticipated project schedule for design is as follows:

The anticipated project schedule for construction is as follows:

The study and design of this project was funded through the City Council’s budget allocated to alleviating drainage issues throughout the city.  The construction of the basin will be funded through ARPA (American Rescue Plan Act) funds.

If you have any questions about the project please email Andrea Podraza or call 630-454-2757.